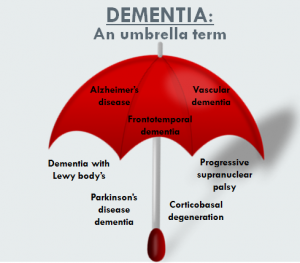 Dementia is not a specific disease. It’s an overall term that describes a wide range of symptoms associated with a decline in memory or other thinking skills severe enough to reduce a person’s ability to perform everyday activities. Alzheimer’s disease accounts for 60 to 80 percent of cases. Vascular dementia, which occurs after a stroke, is the second most common dementia type. But there are many other conditions that can cause symptoms of dementia, including some that are reversible, such as thyroid problems and vitamin deficiencies.

Dementia is often incorrectly referred to as “senility” or “senile dementia,” which reflects the formerly widespread but incorrect belief that serious mental decline is a normal part of aging.

I believe by avoiding certain things and adding certain nutrients you can diminish the risk of dementia. By avoiding MSG (a glutamate), aluminium (all forms foil, cookware, deodorant, vaccinations etc.), artificial sweeteners, fluoride, mercury (also in vaccines and some fish) and AGE’s (caused by cooking food at high temperatures) you can lower the risk of dementia. By adding Omega fats and some cognitive support  along with eating a healthy diet full of fresh vegetables and fruits will go a long way to support a healthy brain for many years to come.