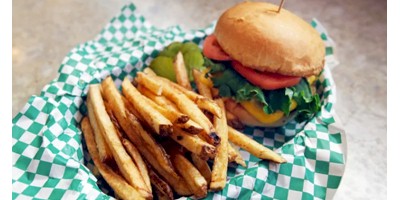 A U.S. government-led trial may confirm the worst fears of anyone whose diet starts and ends in the frozen food aisle. It suggests that people who mostly eat ultra-processed foods will take in more calories and gain more weight than those who stick to mostly unprocessed foods—even if the two diets start off with the same amounts of fat, carbs, and other nutrients.

Lots of circumstantial evidence (and common sense) would lead you to think that diets rich in ultra-processed foods can be unhealthy and likely to cause weight gain. But according to the study’s lead author Kevin Hall, a senior scientist at the National Institute of Diabetes and Digestive and Kidney Diseases, there’s not much concrete proof of a direct cause-and-effect link. That’s a long-standing problem in the world of nutrition, since it’s hard (and expensive) to study people’s diets in isolation.

To help remedy this gap in evidence, Hall and his team recruited 20 healthy volunteers to vacation for a month at the National Institutes of Health’s Metabolic Clinical Research Unit for a randomized, controlled trial—seemingly the first of its kind ever conducted. But while their room and board were free, there was a major stipulation. For two weeks, they would have to eat a diet of ultra-processed foods, while the other two weeks would be spent eating unprocessed foods. Half were randomly assigned to start the unprocessed diet first, and vice-versa.

There’s some debate as what exactly qualifies as an ultra-processed food. But Hall and his team decided to abide by guidelines developed by the United Nations, which take into account the different types of industrialized processing a food or ingredient goes through before it ends up on our plate. An example of an ultra-processed breakfast, highlighted by the authors, might include pancakes, sausages, and hash browns, while a mostly unprocessed breakfast would contain blueberries, raw nuts, and oatmeal.

“[Ultra-processed foods] are a bit like pornography—it’s hard to define, but you’ll know it when you see it,” Hall noted.

Dietitians created the meals for each diet, and designed them to roughly match in terms of total calories, macronutrients like fat and sugar, sodium, and fiber. But importantly, the volunteers were told to eat as much or little as they wanted. Together with freely available snacks, each person had the option to eat up to twice as many daily calories as they would likely need to stay at their current weight, based on a preliminary screening.

While the findings may seem obvious on the surface, Hall said that it’s not clear why people overate on the ultra-processed diet. In recent years, many experts have gravitated to the simple, intuitive idea that since ultra-processed foods tend to be richer in fat, sugar, and salt, it’s these three nutrients that are largely to blame for the rise in weight, obesity, and metabolic disorders. But given the design of this study, that explanation seems to fall short.

“I was kind of suspecting that once you matched for these nutrients—for the fat, sugar, and salt—there wouldn’t be much difference, but I was wrong,” Hall said.

The study wasn’t meant to go much further than testing the specific role of fat, sugar, and salt in increasing our calorie intake. And the small sample size of the study means the findings should be viewed with some caution, at least until more research confirms them. But Hall said there were interesting hints of why ultra-processed foods might encourage us to gorge.

“When people were consuming the unprocessed diet, the levels of a hormone called PYY, which is an appetite suppressant hormone secreted by the gut, actually increased. And similarly, another hormone that’s known to induce hunger, called ghrelin, deceased on the unprocessed diet,” Hall said.

At this point, though, the specific ingredients or chemicals commonly found in ultra-processed foods that could be causing this hormonal shift toward eating more are unclear.

By contrast, one commonly suspected factor for why ultra-processed foods can cause weight gain that didn’t play any big role here was taste: The volunteers said that they enjoyed eating one diet as much as they did the other.

“That throws a monkey wrench into that explanation as well,” Hall noted. “But that’s good news in a way from one perspective. It suggests that if you are able to switch to your diet from one with ultra-processed foods to one without these foods, it doesn’t necessarily mean that you’re going to like it any less.”

Of course, while our stubborn human nature can make any sweeping lifestyle change a challenge, there are plenty of things that make it objectively harderfor many people to switch to healthier diets. Many people living in poorer neighborhoods, for instance, are unable to easily go to stores stocked with fruits and vegetables, yet are surrounded by fast food restaurants and vending machines.

But for those who are able to drastically change their eating habits, Hall said there’s a silver lining to their findings—one that might even mend some fences between proponents of different diet fads.

“There’s a lot of debate in the scientific community, and in the public as well, about whether low-carb or low-fat diets are best for losing weight and what not. But one thing all these people on different sides of the diet wars tend to agree on is that we should eat less ultra-processed foods,” Hall noted. “It’s intriguing to speculate that maybe some of the success stories people have attributed to a low-carb or low-fat diet may have actually been due to changes in cutting the amount of ultra-processed foods in their diet—it’s at least an intriguing hypothesis to keep studying.”

This article was condensed from GIZMODO for Dr. David Jensen