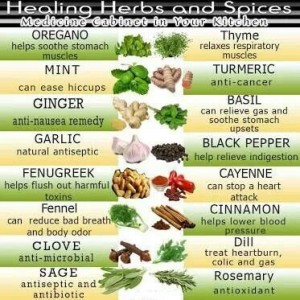 Herbs can be as effective as prescription drugs without the side effects and are quite inexpensive. They also contain vitamins and minerals and your body can recognize and assimilate them, where as the synthetic drugs can not. Many can be grown in your garden or in a pot in a sunny window. For therapeutic doses supplements can be quite helpful. After I became a Master Nutritionist, I took an intensive year long herbology course to be a Certified Herbal Therapist. What I learned is that nature provides everything we need to heal. Here are a few herbs and what they do:

Garlic– Garlic can be a food or a medicinal. Garlic has many healing properties, but the most research has been done on its potential to help reduce heart disease. Garlic has been intensively studied, and numerous large studies have shown that taking supplements that mimic fresh garlic can significantly lower LDL cholesterol levels without hurting beneficial HDL cholesterol levels. Garlic appears to act by blocking the liver from making too much LDL cholesterol. It also has antibacterial, antibiotic and antiviral properties.

White Willow-White willow has been used to combat fevers and pain for thousands of years. Willow bark may be the oldest herb known to treat pain and inflammation, the oldest recorded use is by Chinese physicians in 500 B.C. White willow was also used in ancient Assyrian, Egyptian, and Greek medicine as well as by Native American healers in North America. It is a safe replacement for aspirin and NSAIDS.

Echinacea– Promoters of Echinacea say that the herb encourages the immune system and reduces many of the symptoms of colds, flu and some other illnesses, infections and conditions.

Chickweed– Chickweed is best known for it’s ability to cool inflammation and speed healing for internal or external flare-ups. Chickweed is an old remedy for obesity, according to herbalists women still drink teas of fresh chickweed as one of the classic spring tonics to cleanse the blood. Chickweed poultices are useful for cooling and soothing minor burns, skin irratations and rashes particularly when associated with dryness and itching.

Goldenseal– Goldenseal root was used medicinally by American Indians of the Cherokee, Catawba, Iroquois, and Kickapoo tribes as an insect repellent, a diuretic, a stimulant, and a wash for sore or inflamed eyes. It was used to treat arrow wounds and ulcers, as well as to produce a yellow dye. Goldenseal has numerous uses that are attributed to its antibiotic, anti-inflammatory and astringent properties. It soothes irritated mucus membranes aiding the eyes, ears, nose and throat. Taken at the first signs of respiratory problems, colds or flu, Goldenseal helps can help to prevent further symptoms from developing. It has also been used to help reduce fevers, and relieve congestion and excess mucous.

I recommend everyone buy a simple herb book and try these amazing remedies. And did I mention they are inexpensive?